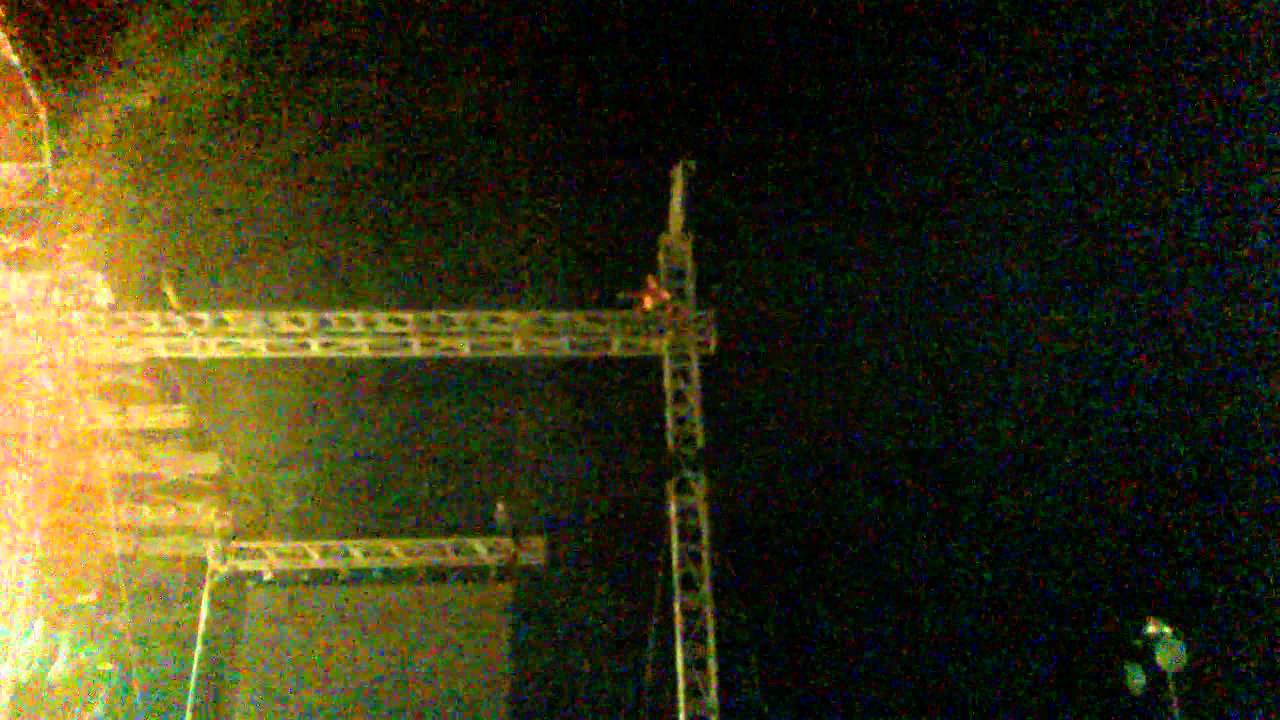 AVENGED SEVENFOLD‘s headlining concert at the Rockstar Energy Drink Mayhem Festival last night (Thursday, August 7) at OKC Downtown Airpark in Oklahoma City, Oklahoma was reportedly delayed mid-performance by a few minutes after a fan climbed to the top of the side wing of stage, creating a safety hazard. Video footage of the incident can be seen below.

AVENGED SEVENFOLD‘s latest album, “Hail To The King”, was certified gold on July 16 by the RIAA (Recording Industry Association Of America) for shipments in excess of 500,000 copies. Released last year, it was the band’s second straight CD to debut at No. 1 on the Billboard chart, following 2010’s “Nightmare”.

The latest effort was recorded after the AVENGED SEVENFOLD bandmembers immersed themselves in the music of two classic LPs: METALLICA‘s Black Album and GUNS N’ ROSES‘ “Appetite For Destruction”.

“The BLACK SABBATH, AC/DC, ZEPPELIN Influence comes through,” AVENGED SEVENFOLD lead guitarist Synyster Gates told TimesLeader.com about “Hail To The King”. “We wanted to create space rather than just fill up every song with four bridges and three choruses and vocal harmonies everywhere, with guitar duels going on. The goal was to focus on the songwriting and the arrangements.”

“Hail To The King” marked AVENGED SEVENFOLD‘s full-length debut with new drummer Arin llejay, whom Gates described to TimesLeader.com as “one of the most tasteful drummers I’ve heard in my life… He’s got that caveman, barbaric huge groove philosophy that we were trying to go for on this record. He’s really got it in his heart and soul. We took the approach of wanting a hungry young kid who could suddenly come out of nowhere and play in front of 50,000 people. He really stepped up.”

AVENGED SEVENFOLD guitarist Zacky Vengeance told Billboard.com that the band will take “a real quick trip to Japan” after Rockstar Energy Mayhem Festival ends on August 10 and then plans to come off the road in order to start working on a follow-up to “Hail To The King”.

“I think once we get home, the ideas are going to start brewing,” Vengeance says. “I know Syn‘s been writing a ton purely for fun, trying different styles, recording backstage, keeping himself busy. I’ve been thinking of all sorts of ideas, listening to tons of different music to get inspiration — as have all of us. And being on tour, I’m so inspired. Seeing bands like BODY COUNT with Ice-T out there, they’re so old-school and riff-based and over the top and slightly offensive and it’s fuckin’ awesome. So there’s tons of inspiration that I know we’ll be drawing from.”

AVENGED SEVENFOLD and KORN are co-headlining this year’s Rockstar Energy Drink Mayhem Festival, which kicked off its annual run on July 5 in Devore, California.

Other acts on the bill include ASKING ALEXANDRIA, SUICIDE SILENCE, TRIVIUM, MISS MAY I and more.

AVENGED SEVENFOLD will reissue its breakthrough second album, “Waking The Fallen”, in a new special edition on August 26. “Waking The Fallen: Resurrected” will include a total of 23 tracks, including 11 never-before-heard songs, new artwork, the original first cut of the music video for “Unholy Confessions” and a 30-minute film featuring the present-day band.